DEX.ANIMEYour Source For Anime!
HomeArticles5 Popular Anime That Got BANNED In China
ArticlesWhat To Watch

5 Popular Anime That Got BANNED In China

A lot of big anime they miss out on 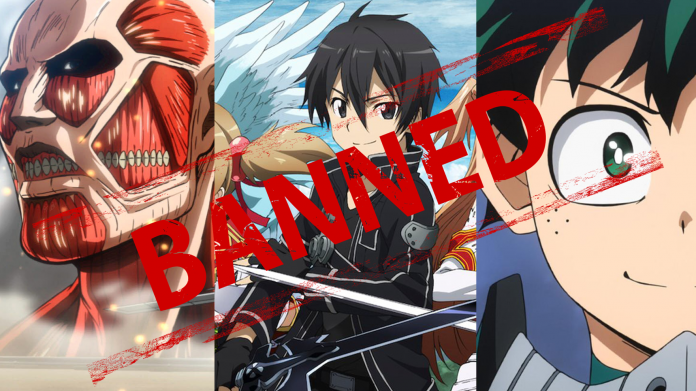 Sometimes countries ban certain anime for various reasons, some valid, some not as much. China is no exception to this and is known for having some stricter rules, like kids below 14 only being able to spend 40 minutes online. So why don’t we take a look at 5 Popular Anime That Got BANNED In China?

During a ban wave in 2020, My Hero Academia was one of the big anime that got the ax and got banned in China. Maruta Shiga is one of the characters in the anime, but Maruta was also a codeword in WW2 that ended up killing a bunch of people from Korea and China. The name was quickly changed to Kyudai Garaki in digital versions of the Manga.

Death Note has probably one of the better reasons to have it banned in my opinion. Young kids started to make their own Death Notes, adding important political figures, friends, family, teachers, just anyone they would not like. Of course, when this got out of hand, the government had to step in and ban the anime to stop it from getting any bigger than it already was. This is not just a China issue, but an issue that was worldwide and multiple countries had put a ban on the anime because of it.

This anime has actually multiple reasons for the ban, some of them are just regular things that we will see later down the list but one of the reasons is actually super valid. People were carving patterns and symbols into their skin and posting the images on social media.

This anime has apparently a reason a lot of isekai anime struggle with in China and that is the depiction of guns and violence. another reason why it is banned might be because the protagonist has free will and can leave its world, something that China is not really in favor of.

Blood and gore is something Attack On Titan features a lot, and in a lot of countries and older generations, anime and cartoons are thought of as something that is for children. So due to that, Attack On Titan actually got an R rating. Some are suggesting that the anime might be banned for some political reasons due to the battle against the authorities, but one can only speculate on that one.

And there were already 5 anime that got banned in China. If this does well we might do another one of these because there is a lot of other anime that got banned in China, or we might do one for other regions. Want some more lists of stuff to watch? Check out these 5 Anime based on games. Let us know what you think about these bans in the comments below