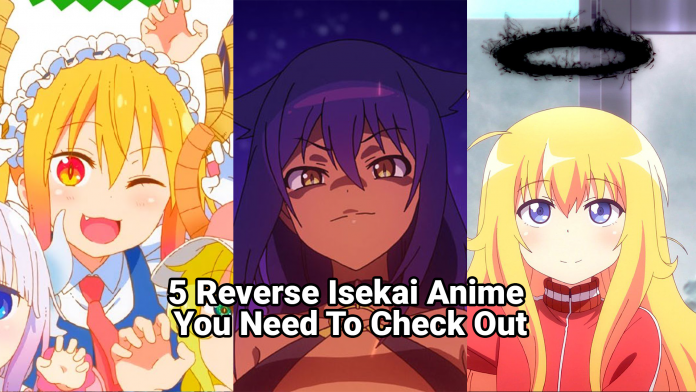 Every anime season has like 10 isekai’s these days, but some reverse isekai are still pretty rare to see. So why don’t we take a look at 5 Reverse Isekai Anime You Need To Check Out!

5. Restaurant To Another World

Restaurant To Another World has a pretty simple concept, while the doors to the public close, some other doors open. The doors to another realm open up and instead of the typical human guests he gets visitors from that other realm. There is not really any action but it’s more of a chill anime to watch to calm down. It does feature 2 different foods per episodes that just get you hungry and wanting to eat that specific food.

Season 1 and 2 are now available on Crunchyroll.

In Gabriel DropOut you follow a fallen angel, in this world angels live among humans to see the world, but this one has a problem, she becomes addicted to video games. In this comedy, you will follow her adventures and the attempts of her demon friend to bring her back to her old self before the video game addiction. If you like the Umaru-chan anime this will probably be something you will like as well.

Season 1 is now available on Crunchyroll.

One of my personal favorites from last year on this list other than number 1 is Miss Kobayashi’s Dragon Maid. Kobayashi has helped a dragon and removed a sword stuck in her back, as any normal dragon would, she becomes Kobayashi’s maid. In this anime, you follow the adventures of Tooru and more importantly another dragon that got shunned out from the dragon world for pulling too many pranks, Kanna.

Season 1, 2, and the shorts are all available now on Crunchyroll.

Ever wanted to know what it’s like for a demon to work at a McDonald’s? Well, here is your chance to finally see it in The Devil is a Part-Timer! Follow his route while he is powerless to try and climb up the ladder and get bigger and bigger in the company.

Season 2 is coming out in the summer 2022 anime season.

1. The Great Jahy Will Not Be Defeated!

The dark realm is destroyed and that leaves Jahy all alone in the real world, with the help of her new human friends at work she learns about the human world and becomes more and more “human” and a good person. Follow her journey to find crystals to recover the dark realm and find the dark lord in The Great Jahy Will Not Be Defeated!

Season 1 is now available on Crunchyroll, but want to learn more about the anime? then read our review on it!

Those were the 5 Reverse Isekai Anime that we recommend you should watch! Want some more lists of stuff to watch? Check out these 5 Anime based on games. Let us know what you think about these anime in the comments below.