One of the most compelling anime I have ever seen. 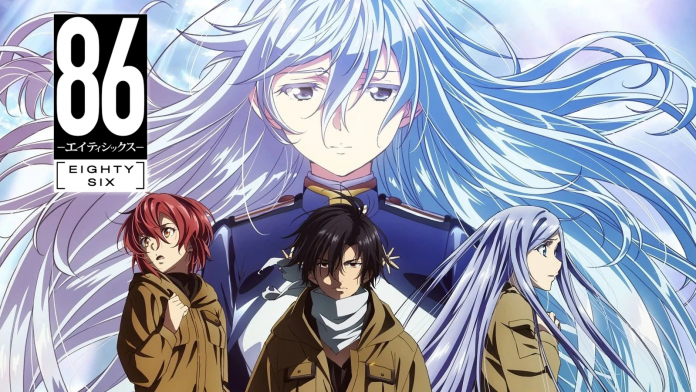 One of the anime that aired in Spring 2021 is 86, a war story about Shin’s squad and his “handler” Lena. Animated by A-1 Pictures and licensed by Crunchyroll. Please enjoy reading our 86 Review.

Going into 86 and knowing nothing about it, I expected a full-on war/action anime filled with a ton of battles. But no, I was really surprised and got something even better than that. An amazing story about what goes on in war from a strange world that segregated everyone that didn’t have silver hair and blue eyes.

While the goal of the characters is in no way clear at all until the last few episodes, it had no bad influence on the show just because of how interesting all the other things going on were, the characters are just that interesting that they didn’t need a pushing force to keep them busy doing random stuff.

86 has some of the most compelling and interesting stories I have ever seen. It just keeps you on the edge of your seat during most of its episodes, and while the main issue got resolved in episode 9, the last 2 episodes give you a good look at what’s to come in 86: Part 2.

There was 1 half of an episode just filled with footage from the robot they keep around recapping its story from his eyes in ways that we didn’t see before. from happy times to hardships that come about later on the squad’s base.

In the world of 86, if you don’t look like the “elite” you are not seen as human, so the inhabitants of District 1 do not care about the people dying and don’t even count them as casualties when they die. Only our protagonist Lena sees them as actual people and doesn’t see them as a character in a video game, like most of the other handlers see them. So she takes the time to actually talk to the 86 on a daily basis and tries to form a bond with them.

I want to talk about so much about 86 but at the same time not at all to not spoil the readers. But this anime is really special, in the way Attack on Titan was special in the beginning, and I personally think 86 is just so much better than Attack on Titan if I had to pick.

While there was not much action going on, the action that was there was so visually stunning, it did 3D mixed with 2D in a perfect way and I just got blown away. It was unique in a way that I have never seen myself in any anime before watching 86.

The opening is one of the most hyped music pieces I have ever listened to, it hypes the anime up in a way that you expect a ton of action, but when you learn more and start to care more, it just hypes you up to get more excited about getting just a little bit more time with the 86 and Lena.

86 is one of the best anime I have ever seen, you can quote me on that. with a story so compelling that keeps you on the edge of your seat with some of the best music and hyped opening themes ever.86 Review