A hidden gem amongst the common cards 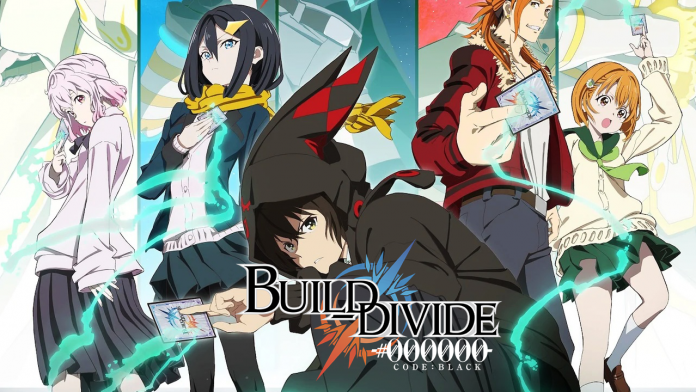 Card animes have been lacking this season, but at least there is Build Divide, not the best anime I’ve seen, but if you remove the card battles the show is actually pretty interesting. Sadly, some of the battles take so long, and after seeing 1, you have kinda seen them all and it becomes just so boring to watch.

The best moments in the anime are the bits where they just skip over the battle and go more into the story because the length of the battles really throws off the pace. The concept of the battles is pretty cool, but they all just feel the same. What I do like is how important the battles are in Neo Tokyo and how the world revolves around it.

Build Divide: Code Black is about Teruto, who lost his memory but he only knows 2 things. He needs to defeat the king in a battle and he loves bread… Yes, bread. I have no clue why and it doesn’t get explained either, there is only a long flashback about baking bread that doesn’t really drive the story forward in any way other than “confirming” that one of the characters he meets along the way knows him from his childhood.

The whole show is kinda messy but it still moves along with the fact that they need to collect coins to get to the king. But the fact that they have to go through so many random loops doesn’t really feel as fun, especially later down the line where the story just goes nuts with some twists.

Something that doesn’t help is that the last 3 episodes are just talking to “the king” and the final battle. The buildup was just so much more entertaining, every time something with the king came up the whole mood just got ruined over and over.

Did I already talk about the beach episode? It was honestly one of the better bits of the show, some of the side characters finally got some more world-building, but sadly this is all for nothing because one of the later twists totally negates a ton of character building we see in the anime.

I really liked the look of the main characters and how they styled the world. It has this feel of the real world while making it really tech-like as well. The flashbacks have this old style to them and are not in 1080 size, this really made me question if there wasn’t an old anime of build divide but no, they just styled it like an old anime with the black boxes on the sides and I just loved that for some reason.

The soundtrack of the anime is just not that great, I enjoyed the Ex-Arm opening more… and that says a lot. It just felt really boring and didn’t really have a theme that fit it.

While I love the concept, the pacing and the card battles of Build Divide Code Black really are slowing down the hype for me, sometimes the battles just took way too long, and the game itself is not that interesting. The best episodes are the ones where there is actually some story and character development, but due to the length of the battles, it just is not as good as I hoped when I started this anime.Build Divide: Code Black Review