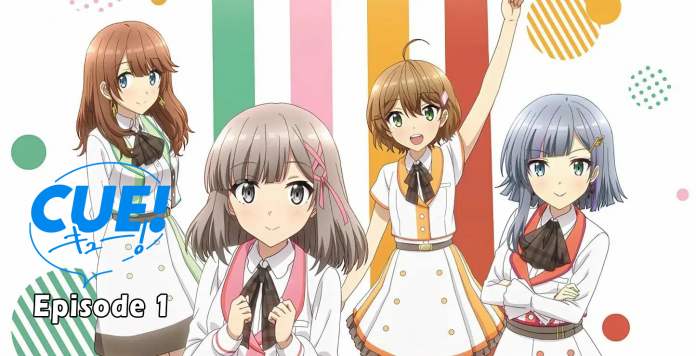 Winter 2022 starts its first anime coming from a game, Cue! It’s about a group of girls hoping to become voice actresses. Animated by Yumeta Company and Graphinica. Please enjoy our Cue! Episode 1 Review.

Straight away, this anime is not what I expected it to be. I thought based on the image I saw that it was going to be an Idol-type show, but no, it just starts with a jetski battle while rockets are being shot. They go to a door and teleport to some tree from medieval times… So totally not what I expected. Until it switches to a studio where someone is speaking these lines for an anime recording…

So the anime is about a new agency called AiRBLUE, which only signs people with no experience to help them achieve their dreams. So there are a total of 15 girls they signed, and that’s a lot to focus on. Straight from the get-go, their new vocal teacher walks in and they will start a surprise special lesson.

They perform Hamlet, and during it, the scene changes to a setting that fits it perfectly. I really like how they are doing this, instead of the usual tense talking back and forth it actually transports them to another scene.

Sadly there is not really anything more then that in the episode. I know it comes from a mobile game so maybe thats why they didnt really focus on that because they think most of the game players would watch it. But im having more hopes for next episode.

A few of the characters definitely stick out above the rest of them, and i do hope they keep the focus on a few of them and not all 15, otherwise, the development might be really slow and a bit pointless, but I think there will be 24 episodes, so that might even it out a little bit.

While I love the show, this 1st episode didn't feel anything like an introduction at all, we just get right into the story and don't really learn anything about the characters, they just went: "hey here are 15 characters that wanna be voice actresses, go do some hamlet" and that was it.Cue! Episode 1 Review