An overhyped and underwhelming 1st half of the season. 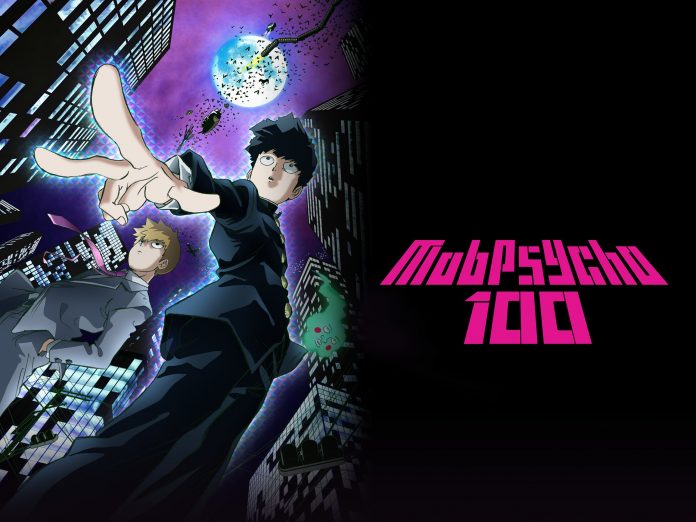 Mob Psycho 100 follows Mob, an esper with some special psychic powers. During the anime, you will follow his story while he deals with multiple roadblocks in his life as a normal teen and as a powerful being. Here is our full Mob Psycho 100 Review!

The anime was released in the Summer 2016 season. Mob Psycho 100 was animated by Bones and based on the manga of the same name by ONE.

Let’s start off with its story, something that really isn’t that great for the first 8 episodes and is just annoying and even cringes at times. Not until the action against the main evil “Claw” starts, anything really happens other than 1 cool fight against his 1st rival that gets pretty cringy at times as well.

Mob as the main character at times is great, he tries to improve and overcome, but due to his minimal expression, even that gets downplayed a lot until other characters point it out. I do like him, but at times he can be pretty boring, mainly due to him not wanting to fight humans (even with powers), something that only gets brought up after we have seen him do a ton of cool stuff against evil spirits, even 1 that possessed a human.

That brings us to 1 of the 1st annoying characters that do actually redeem himself in the last few episodes by being a little bit less annoying and actually pretty funny and helpful at times, Dimple. Most of the time he is the most annoying thing ever, but later when he turns around and becomes more helpful or “good” he actually becomes kinda funny at times and really makes all the other characters bring out the best in themself.

Most of the other characters really aren’t that better. The main character Mob is just an emotionless empty shell until he goes 100. His mentor is just a fake psychic that is only fooling Mob and all the characters that don’t matter. And finally, we have the worst character (that does redeem himself, in the end, more as well), Mob’s little brother. He is just an anoying jealous kid that has everything he could ever have and takes it for granted. There is this weird and short storyline where he goes a bit evil, and that is also where the anime hits its lowest point in the season.

Visually it looks very appealing in still form, but in actual animation, it only really shines during the fight scenes. I do see what try are trying to do with a more simple and unique way of doing it, but in execution, it just doesn’t feel that enjoyable to look at early on. The more you watch the show the more you do get used to it and it grows on you.

Want some more reviews? Check out our Review Tab. Please let us know what you think about the anime below.

While i really hated the first 7/8 episodes, it really grew on me, but it just took a little too long for me to actually start enjoying it with the time they had to hook me. I can see the appeal and I do expect something better in season 2 the way things have been going in the 2nd half.Mob Psycho 100 Review