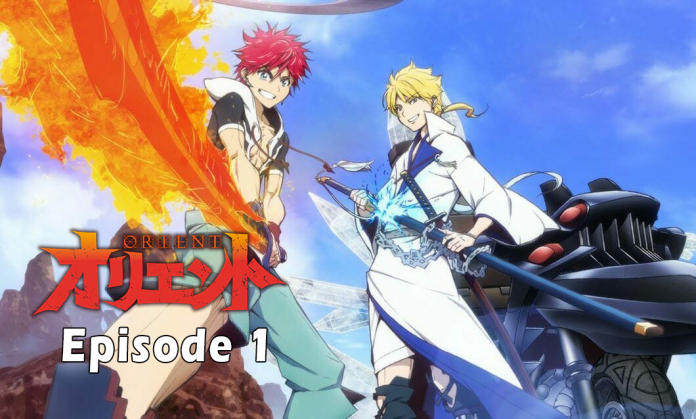 The Winter 2022 season is off to a great start with Orient, an action fantasy shounen set in a world where the evil Oni are seen as gods. Animated by A.C.G.T. and produced by Avex Pictures. Please enjoy our Orient Episode 1 Review.

When the main character Musashi completes his Minecraft miner training, he wants to become something that’s hated in the world of Orient, an Bushi. A Bushi is a kind of samurai that defeats the Oni, but the Oni are seen as gods and the Bushi as destroyers, but of course, this is not the case because everyone lives under the Oni under false expectations.

Mushashi spends years training with a special pickaxe to defeat the Oni. His weapon looks kinda epic as well, it’s not just a basic pickaxe, no no, it’s a massive red sharp pickaxe, because it’s red it already gets a +1 in my book.

There is also Kojirou, he is a descendant of the Bushi and is hated in town because of it. He wants Mushashi to live a normal life, but when things got tough and Mushashi tried to attack the Oni anyway, he swoops in on a crystal/magic-powered motorcycle and hands Mushashi his pickaxe that the helpers of the Oni took away.

Kojirou and Mushashi have a cool battle against a group of “Oni Masters”. I’m not sure if they are like “lite” versions of Oni or something, but they looked pretty cool and unique on their own. When they defeated almost all of them, one of the highest-ranked Oni swoops in, but that’s something we will see in episode 2.

I really loved what I saw and will for sure make this one of my weekly highlights. So if you wanna know more, be sure to read next week’s review and of course, watch Orient for yourself on Crunchyroll.