DEX.ANIMEYour Source For Anime!
HomeReviewsThe Fruit of Evolution: Before I Knew It, My Life Had It...
ReviewsSeason Review

The Fruit of Evolution: Before I Knew It, My Life Had It Made Review

It's a strangely good anime with a weird story 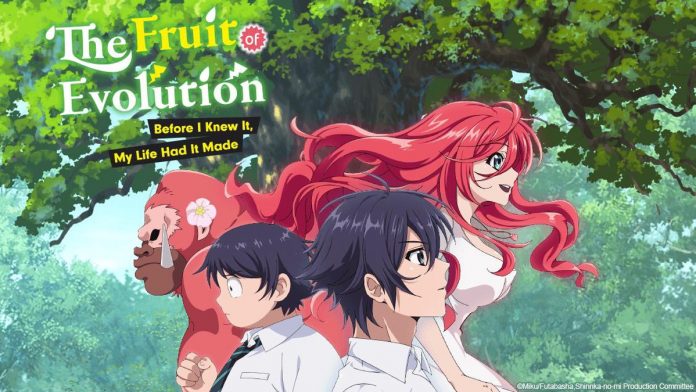 One of the weirder shows this Fall 2021 season is The Fruit of Evolution: Before I Knew It, My Life Had It Made. The anime is a comedy and “romance” isekai. Animated by Hotline and released by Crunchyroll.

Common world fat loser turns into the most OP character in this strangely good Anime. Seiichi is this weirdly likable main character that in the real world is just some loser, but when his isekai adventure starts, everything just goes right for him. The story is more about building some weird harem than actually some evil force. Near the end of the anime, the evil force just gets wiped out within 2 minutes of the final episode, and then it goes back to the girls.

The story is kinda all over the place and it doesn’t really feel like they are working towards something other than reuniting with the other people that got isekaid, but the main character doesn’t even actively try to pursue that either. Every episode something random happens and they have to deal with that specific thing for 1 or 2 episodes.

While the characters are all kinda dumb and a bit sexual, they can be super funny at times. There is one part of the anime that had me dying of laughter where the main character was just smiling and then the cam shifts over to the guild leader’s bulge and then it just shifts back to the main character without the smile looking kinda angry. Just the way it was framed was just perfect and so memeable.

As i said before, the ending of the show went so fast and the ending didn’t really feel like an ending, it was just so open and it just felt like it was randomly cut off. But I know season 2 got teased/told about during the ending scene, so I really hope it gets a 2nd season to actually see some story development other than some minor character development. Because it just felt like 1 big introduction.

One of the story bits I really loved was the introduction of the cat girl and the girl that is cursed with bad luck. The girl with bad luck just changes into a whole new character when her issues are resolved, but when Seiichi accidentally proposes to her, it just goes so fast and it just goes over that whole “we are now with 3 people in a relationship” bit so extremely fast that “Girlfriend, Girlfriend” seems like an eternity before they get together.

The artwork of the characters looks cool, but also super basic, non of the characters really feel unique and they all feel like a copy of another anime. Even the main character is just so bland, he is just a basic dude without anything that makes him interesting.

The opening of the anime is rather forgettable overall, but the start tune is pretty epic, it has some nice rhythm and drums that just open the anime with a blast. But other than that it starts to feel so basic.

While I did love it for what it was, the anime itself is not the best and can feel boring and rushed at times. With more focus on introducing all the characters and an ending battle that is just over within 2 minutes, I do feel like adding a 2nd season or season 1 having more episodes to explore this world more and build on some type of force going against them would be interesting to see in the future.The Fruit of Evolution: Before I Knew It, My Life Had It Made Review