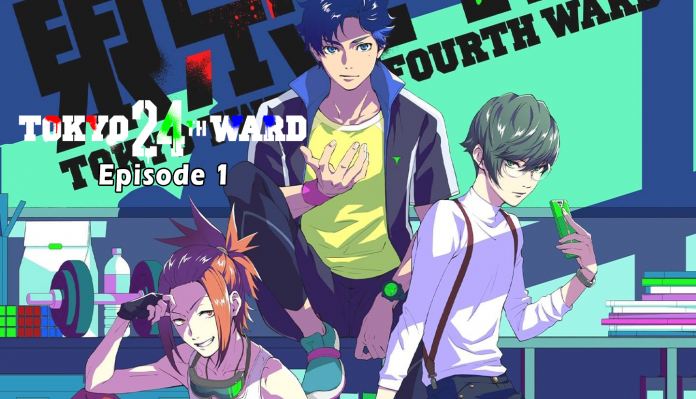 The 1st of 3 CloverWorks anime this Winter 2022 season is Tokyo 24th Ward, an anime original superhero show with a strange twist, their brains get “hacked” and get super abilities. Animated by CloverWorks and produced by Aniplex. Please enjoy our Tokyo 24th Ward Episode 1 Review.

Tokyo 24th Ward starts off pretty grim, we see a school building on fire and our main character Shu jumps into action to save 2 girls from dying while his friends try and keep him from going in. But when he gets in, 1 of the girls jumped in front of the falling rocks to protect the other girl.

Then we switch over straight away to 1 year later, with Shu getting ready to go to the memorial of the burning building and the death of his friend. Nothing can go easy, and when he is in front of his house talking to his friend, 2 guys are causing trouble and making a commotion. Shu jumps into action again and headbutts both tugs down while his friend says that he was gonna stop being a hero.

Then we go to the 2nd person of the “RGB” friend group, Ran, who is finishing up a Livestream where he spraypaints some cool piece of art. We don’t really see more of him at that time or learn more, so it seems like Shu is gonna be the main focus of the anime. But what we do learn is that Ran got a group of friends that help him out with stuff, but with what is not yet known.

We finally go to the last main character is Koki, who seems to be from a rich family, because he got a driver and the whole “rich smart kid” vibe going on. They all get to the memorial service and learn that the girl that got saved has had a lot of issues over the past year and stopped going to school.

The 2nd half of the episode totally changes the vibe of the show, it suddenly goes right into some superhero thing where the guy’s brain gets hacked and they get superpowers to stop a train from killing one of their friends… yes it sounds weird, but it was actually pretty cool to see and I’m really curious to see where this anime goes with its story.

I heard some bad things about an animator on the show talking about bad animation and crunch, while it’s not really visible for the main cast of characters, all the background people in 3D have some real EX-Arm level of bad animation going on.

just like the background animation, EX-Arm shines through in the opening, it’s an English song that seems a bit out of place, maybe the more I listen to it as weeks go on this will change, but the song is not that bad.

Tokyo 24th Ward is surprisingly good with its story and introduces its story great with keeping its mystery and not telling everything in the 1st episode. While the episode was 48 minutes instead of the usual runtime, it was not really noticeable because of how enjoyable the concept is. One this that's mostly offputting is the background characters, they just look really out of place and have some EX-Arm levels of animation.Tokyo 24th Ward Episode 1 Review