Some good Ecchi stuff going on 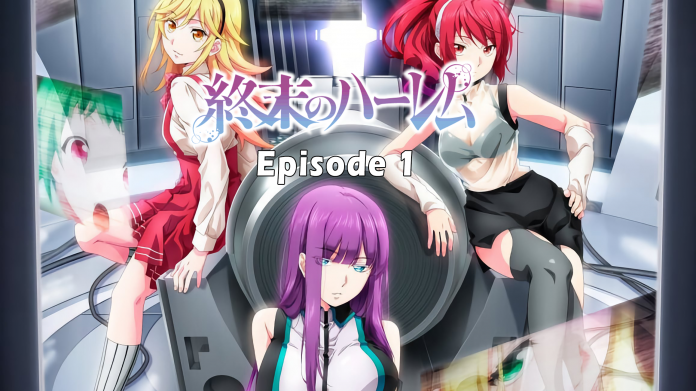 Looks like we get some good Ecchi anime this Winter in World’s End Harem, where only 5 surviving guys have to mate with a ton of girls to save the human race. Animated by Studio Gokumi and AXsiZ. Please enjoy our World’s End Harem Episode 1 Review.

Less than 1 minute into the episode, before even the opening started, is already pretty wild. Without any real context, you just see a big group of nude women, no tops on, boobs full on out. If you are watching on Crunchyroll this will be censored, but on other sites, not so much.

The main character, Reito, is sick and has to be put in cold sleep for a few years to find a cure for his disease. Right before he goes in, the girl that has a crush on him comes in to see him off, and because he can’t have jewelry on in the sleeping pod, he gives his necklace to her.

When he is woken up, something pretty drastically has happened, a virus wiped out half of the population of the world, not just any half, 99.9% of the men in the world are gone. Reito is tasked to save the world… by sleeping with a ton of women and “spread” his kids.

While his younger sister is still around, there is a mystery surrounding the girl he likes, because she disappeared 3 years ago without any trace. But his “caregiver” looks a lot like her and tries to sleep with Reito.

While there are some other people put to sleep that have the virus, it doesn’t completely save them, because, within 1 year, they will die as well. So before that happens, he needs to make some kids to try and save them as well, and one of these guys includes his brother.

The animation of everything is pretty good, but it feels kinda basic, nothing really special about it sadly. But the music is great. I’m not sure if it’s the outro song or intro song, because at the beginning of the episode was no theme playing.

World's End Harem is a good example of ecchi to the max, and I'm 100% for it. it just jumps straight into "action" and shows that. The story is simple, but it might be pretty interesting in the weeks to come, especially with the element of his friend that disappeared.World's End Harem Episode 1 Review